Standon Parish is rich in archaeological sites, containing no less than 16 areas designated as being of archaeological significance and one scheduled ancient monument, the Roman Town at Wickham Hill. The Scheduled Ancient Monument is principally to the north and east of the Conservation Area. The settlement was a major centre for importing luxury goods from the Roman Empire in the period between the expedition of Julius Caesar to Britain (55-54BC) and the Roman invasion (AD43), and is one of the most important Iron Age sites in Britain. A Roman town succeeded the late Iron Age settlement soon after the Roman invasion and its remains lie on Wickham Hill. 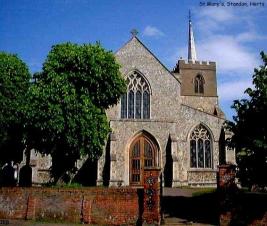 Parish Church of St. Mary, Standon is especially interesting on account of the fine chancel arch of early 13th-century date, the Field tomb, with 15th-century brasses, in the N. aisle, and the Sadleir tombs, of the 16th and 17th centuries, in the chancel. Monuments: on N. side of chancel, large, marble, of Sir Thomas Sadleir, died 1606, and his wife, recumbent effigies in a large round-headed recess; on the base, figures of son and daughter and two heraldic shields: on the S. side of chancel, of Sir Ralph Sadleir, died 1587, with his effigy in armour; on the side, figures of three sons and four daughters, with heraldic shields. Suspended above the monument, two helmets, a sword, stirrups, halberd, spurs, etc., and standard of a banner, said to have been captured by Sir Ralph from the King of Scotland at Musselburgh. In the N. aisle, altar tomb, plain stone sides, with indents for three shields; in marble slab at the top, two brass figures, of a man in robes of an alderman of London, said to be John Field, died 1474, with small figures of two sons and daughter below; of his son John, in armour, with arms of Field on his tabard, two sons and two daughters below; at corners of slab, four shields with arms of the City of London, of the Staple of Calais, a merchant's mark and arms of Field; inscription at side, with alderman's name and date of son's death missing. In the vestry, mural tablet to Anne, daughter of Sir Edward Coke, wife of Ralph Sadleir, 1660. In E. wall of chancel, outside, tomb of Richard Sadleir, undated. in S. wall of chancel, partly destroyed by the Sadleir monument of 1587, 15th-century: against the E. wall of N. aisle, ancient, with sill of unusually great projection: in S. aisle, with moulded jambs and head, mid-14th century. In a modern recess in the S. aisle, ancient stone Coffin, without lid.

This is probably the site of one of the most important historic gardens in the county. A house like Standon Lordship, grand enough for visits by Queen Elizabeth, would have had formal gardens to match, but no documentation survives. A vineyard containing a covered seat existed here in the later 17th century, possibly surviving as apparent ridge and furrow on sloping ground south of the house, but there is little other known detail. A 1766 map shows a series of courtyards south of the house, two containing gardens, within a landscape of pasture with scattered trees. The main carriage drive came from the north, with another from the west. Following the estate's sale in 1767 it gradually fell into disrepair and the gardens disappeared; much of the land which appears to have been gardens in the 16th and 17th centuries was later sold off as farmland. Some walls survive on the south side of the house.

A large almost square area south of the post-medieval house.

Cropmarks of a large square or rectangular area, about 85m x 90m and consisting of two parallel lines They are more or less aligned on the house and presumably relate to either the house or the gardens. These are a complex pattern of linear scarps and ditches on the same axis as the surviving range of the 16th century house and presumably represent garden enclosures and terraces of 16th or 17th century date. The fact that they lie at a considerable distance from the house indicates that the gardens must have extended over a very large area.

Queen Anne's Bath and other Earthworks

Lynchet (Ridge or ledge formed along the downhill side of a plot by ploughing in ancient times).

Four well defined lynchets on the steep valley scarp immediately west of the River Rib. The terraces are 2m high. Above the lynchets is a small embanked enclosure 20m by 5m with an entrance to the south and banks 1.5m high, this is labelled 'Reservoir (Disused)' on the 1879 OS map.

For the reservoir and other earthworks, see the Lordship gardens above. The nature of these earthworks is not entirely clear, although at least some (including the reservoir) relate to the post-medieval gardens. Stone has supposedly been found about 60 yards to the north, at TL 3910 2163.

In some ways they resemble medieval strip lynchets. Certain aspects suggest, however, that they could be the remains of an extensive area of gardens NW of the post-medieval house at Standon Lordship, see above. The terraces have unusual features, such as a bastion-like projection at the north end, and it is noticeable that 'the hillside is only terraced in this way where it is visible from the Lordship. They are also adjacent to the mysterious earthwork known as Queen Anne's Bath, an embanked rectilinear enclosure of unknown function, but if this is not a garden feature it is difficult to know what else it could be. 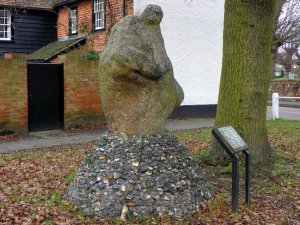 The Standon Pudding Stone on the corner of Paper Mill Lane is not in its original site. It was moved to its present site in 1904 from outside the Star pub, but before this it may have stood on the site of the present church as a 'great stone' or meeting place where ancient Britons would gather to decide matters of interest to the community. The plaque states: "This stone is a conglomerate of glacial origin, sometimes called 'breeding stone'. It was formerly incorporated in the wall of the churchyard. It is thought possible that the stone might have marked a prehistoric, tribal, religious meeting place and that the early Christians therefore chose the same site on which to build the church. The stone was placed here in 1904 by the Rev. W. d'A. Crofton, then curate-in-charge of the parish. The adjacent oak tree was planted in 1911 by Miss Kate Smith to commemorate the coronation of King George V."

The Parish of Standon straddles the Greenwich Meridian which is marked in several places by Meridian Markers, one of which is located in the NE corner of the grounds of St Edmunds College and can be seen from the C184 and the road to Dane End. The Parish of Standon covers 2379 hectares and is bisected by the River Rib, running from North to South. It is located in the centre of the East Hertfordshire plateau, which is the largest area of open country in the county. Milestones are located next to south east corner of 16 High Street, Puckeridge and 120 metres north of drive to Ryders Grove, Old Hall Green.